SDRAM is synchronous, and therefore relies on a clock to synchronize signals, creating predictable orderly cycles of data fetches and writes. However, SDRAM transfers data on one edge of the clock. DDR SDRAM means that this type of SDRAM fetches data on both the leading edge and the falling edge of the clock signal that regulates it, thus the name “Double Data Rate.” Prior to DDR, RAM would fetch data only once per clock cycle. Synchronous data lends itself to faster operation when coordinating memory fetches with the processor’s requirements.

Many people refer to a processor’s RAM as simply “DDR”, using the terms interchangeably because DDR is so widely used as CPU RAM and has been since the late 1990s. DDR is not flash memory like the kind that is used for Solid State Drives (SSDs), Secure Digital (SD) cards, or Universal Serial Bus (USB) drives. DDR memory is volatile, which means that it loses everything once power is removed.

This release occurred in 2007, and XMP profiles were implemented here. To begin with, the memory modules operated at 1.5V and 1.65V, with base speeds of 1066 MHz, and the density reached up to 8 GB’s per module.

• (XMP or Extreme Memory Profiles, is an Intel technology that allows you to change multiple memory settings by simply selecting a different profile, taking advantage of higher than standard memory speeds)

This did not arrive until 2014, but today it is the most widespread. The voltage is reduced to 1.05 and 1.2V, although many modules operate at 1.35V. The speed has been notably increased, and each time faster memories are released from the factory, but its base began at 2133 MHz. Currently, there are already 32 GB modules, but this is also being expanded little by little.

Although these four types of memory are DIMM formatted and can look very similar in appearance (in fact, they are all 133.35mm long). There are fundamental physical differences whereby you cannot plug a DDR1 RAM module into a DDR2 socket.

All modules have an opening in the area of the contacts that will prevent them from being connected to the sockets of another generation.

Finally, it should be noted that in each generation, the number of contact pins has changed as follows: 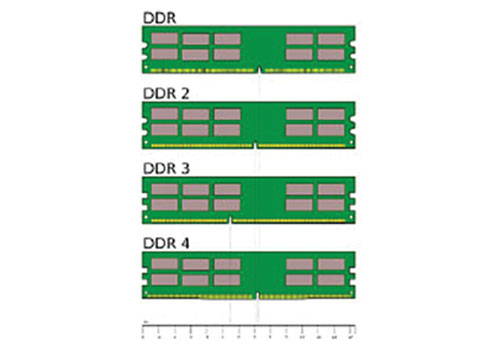 The largest difference from generation to generation of RAM has been the performance. As technology has advanced and improved, we have generally seen doubling for each release.

DDR5 SDRAM is the next standard proposed to double the speed of DDR4 SDRAM. According to the JEDEC Solid State Technology Association, the standard-bearer for DDR SDRAM, “The JEDEC DDR5 standard is currently in development in JEDEC’s JC-42 Committee for Solid State Memories. JEDEC DDR5 will offer improved performance with greater power efficiency as compared to previous generation DRAM technologies. As planned, DDR5 will provide double the bandwidth and density over DDR4, along with delivering improved channel efficiency.”