NAND Flash is a type of non-volatile storage technology that does not require power to retain data. An everyday example would be a mobile phone, with the NAND Flash being where data files such as photos, videos and music are stored on a microSD card.

NAND Flash is all around us – in our smartphones, in modern televisions and in the computers and tablets in our homes and offices. It is also found outside, in all sorts of equipment from traffic lights to digital advertising displays, automobiles, and cameras. Anything that has artificial intelligence (AI) and needs to retain data is likely to contain NAND Flash.

NAND Flash is available in different grades; industrial, commercial and consumer. There are significant differences between industrial and consumer grade NAND, so it is important to consider the impacts these differences have on reliability, endurance, and total cost of ownership, before selecting the NAND Flash that is right for a specific purpose in your application.

The way that NAND Flash is made can have a dramatic outcome on the performance characteristics.

NAND Flash goes through over 800 different manufacturing processes and it takes many days to make just one wafer. NAND factories or ‘FABS’, run 24/7, 365 days a year for maximum efficiency and are 100 times cleaner than hospital operating rooms. FABS can make different types of NAND Flash (SLC, MLC, TLC, QLC and soon PLC) and come in different sizes.

Once the wafer is divided, or cut into separate chips, these are analyzed and graded as 1,2,3 or 4, with 1 being the highest quality. The chips are then shipped to manufacturers who use the NAND in their own products and applications.

In the simplest terms, the data stored on NAND Flash is represented by electrical charges that are stored in each NAND cell. The difference between Single-Level Cell (SLC) and Multi-Level Cell (MLC) NAND is in how many bits each NAND cell can store at one time. SLC NAND stores only 1 bit of data per cell. As their names imply, 2-bit MLC NAND stores 2 bits of data per cell and 3-bit MLC NAND stores 3 bits of data per cell. 3-bit MLC is referred to as Triple-Level Cell (TLC) and 4-bit Quadruple-Level Cell (QLC). The fewer bits per cell, the smaller the capacity, but data is written and retrieved faster, and the NAND chip has a higher endurance level so it will last much longer. In summary, SLC is the fastest and has the highest endurance but lower capacities. TLC is slower, with lower endurance, but has a much higher capacity threshold.

The graph below shows bits per cell and their key characteristics. 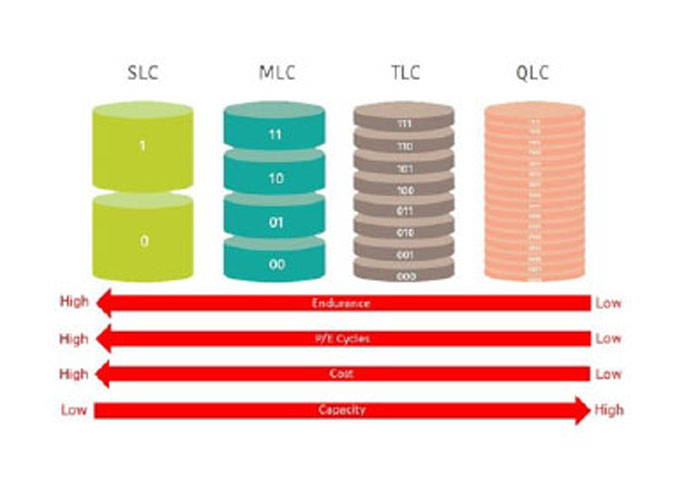 There are pros and cons for each type of NAND Flash. SLC holds less data but is very fast and has the highest endurance characteristics. It is, however, the most expensive. Other types of NAND can hold more data and are cheaper but have much lower endurance levels and are often slower. So, when deciding which NAND flash is suitable for an application it is important to carefully consider these characteristics and their impact on application performance.

Probably the key differentiator between NAND types is the endurance or Program & Erase (P/E) cycles. Due to the way NAND Flash memory works, it requires that a cell is erased before it can be written to. The process of erasing and then writing a cell is called a P/E cycle. Each time a cell is erased it is damaged or worn out, so there is a lifetime for each cell. This is exacerbated by the makeup of NAND Flash. A cell can only be erased as a block and written as a page. The size of each block and page is dictated by the design of the NAND Flash chip, but a block consists of many pages. If the information in a cell changes, it is written to a different cell and the old data is marked as ‘ready for deletion’. Then, the ‘good’ data in a block is moved elsewhere and the whole block is erased.

So, often even if data in a cell does not change it will still go through a P/E cycle. Cells are worn as equally as possible using wear-leveling technology. This whole process increases the number of P/E cycles and ensures that the NAND Flash does not fill up with redundant data. The lifetime of the device is defined as endurance and is proportional to the P/E cycles of the NAND Flash.

In comparing the different types of NAND, the typical P/E cycles are as follows:

pSLC mode is a hybrid of 2 bit per cell MLC using intelligent firmware to emulate the storage states of SLC. This results in increased endurance on MLC (20-30K P/E cycles) at only at a fraction of the cost when compared to SLC. For industrial applications where cost and reliability are of equal importance, this offers a good middle ground.

The comparison table below highlights the differences of the main types of NAND Flash and their key characteristics. 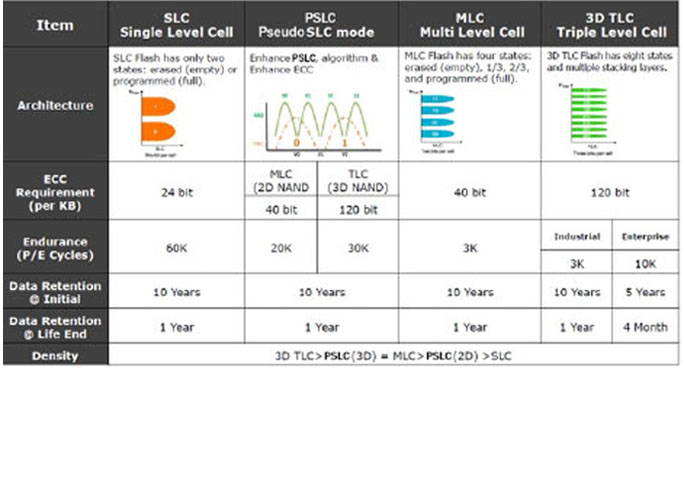 Industrial grade NAND is typically SLC, pSLC, and MLC and until more recently 3D TLC. Industrial grade is highly customizable and works in wide operating temperatures of between -40°C to 85°C and is used in the aerospace, defense, transportation, medical, marine, energy, and infotainment sectors to name just a few.

Consumer grade NAND operates in temperatures between 0°C to 70°C, and is typically found in phones, laptops, tablets, PCs, televisions, DSLR’s and other consumer electronics products.

3D NAND will continue to push the boundaries of bit density, performance and capacity per device. NAND Manufacturers have already achieved 3D designs with as many as 176 layers, which improves both read latency and write latency significantly — dramatically accelerating application performance. This type of performance will continue to facilitate growth in a broad array of sectors, including mobile storage, autonomous systems, in-vehicle infotainment, and client and data center solid-state drives (SSDs).